Will you believe that cool Aussie actor Hugh Jackman who plays Wolverine in the X-Men series READS? 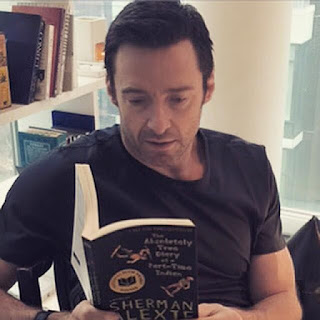 In this photo, he appears to be engrossed in a paperback copy of Sherman Lexie's "The Absolutely True Diary of a Part-Time Indian"

I wonder if Wolverine was having a reading session with high school students?

Hugh Jackman aka "Wolverine" or "The Greatest Showman" was one of the American Library Association's poster boys to encourage young men to read and I applaud him for that.

I love Hugh Jackman as an actor and now also as a responsible role model for young adults because he'd recently posted a hand-washing video on Instagram and he let the tap run as he washed his hands.

He later deleted the video just 12 hours later, admitting it was wrong of him to have left the tap running.

The Greatest Showman star then changed the caption of the post and said: “Thank you everyone for picking me up on my mistake, which was to wash my hands while leaving the water running the whole time.

He added: “That was not good. I wasn’t thinking.”

However, later the Australian actor chose to delete the video from all social media.

The Greatest Showman actor then re-filmed the video making sure this time he turned the tap off with the caption: “Take 2. You’re ALL absolutely right.

“Turn off the tap whilst washing your hands. Smart, healthy practices for yourself .. and the planet.’